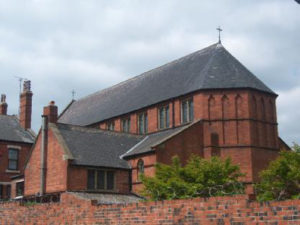 The establishment of the parish was indirectly the result of the building of Armley Gaol in 1847. Fr Denis Collins from St Anne’s Cathedral was Catholic chaplain there and in the 1860s was saying Mass for the people of New Wortley (at an unknown location). The parish was established in 1868 and Fr Collins was appointed the first parish priest, with Mass said in his house at 47 Holdforth Street. He soon acquired a site along Green Lane between Nicholson Street and Copley Street where in 1871 the first Holy Family School was opened. The school chapel, seating about 120, was used for  Mass,  but  as  it  served  the  growing  Catholic  population  of  Armley,  Wortley, Bramley and parts of Holbeck and Beeston, it soon became inadequate; by the 1890s this population had grown to about 800. The foundation stone of a new church designed by John Kelly (architect of St Patrick’s, Leeds) was laid by Bishop Gordon on 17 June 1894 and the completed church was opened on 5 August 1895. The cost was £3,100 and the church sat a congregation of 450. The church was consecrated by Bishop Cowgill on 26 May 1923. In the late 1950s a new entrance porch was added at the west end.

The church is orientated north-south but this description follows conventional liturgical orientation.

Gothic Revival church of 1894-95 by John Kelly of Leeds, one of three churches he built in the diocese. Red brick laid in English garden wall bond (3:1), stone dressings and Welsh slate roof. The church consists of nave, aisles, apsidal sanctuary with flanking chapels, and a later western porch or narthex. On the south side there is a transept-like sacristy extension giving off the aisle. There is no tower.

The main entrance west front has an asymmetrically-placed red brick porch or narthex, added in the 1950s, with lancet windows and a lean-to slate roof. Behind this, the gabled west front is dominated by a large west window of 6 lights with Curvilinear tracery. Simple Gothic arched doorway in the west wall of the north aisle. On the side elevations the aisles are windowless, although on the north side at least the wall face is articulated by blind Gothic arcading. Above this, square-headed and paired clerestorey lights with cusped tracery. The canted apse to the sanctuary, like the aisle walls, is blind, with the wall surface articulated by blind brick arcading.

The interior is lofty and wide. Four nave arcades supported in circular piers with moulded capitals, bases and arches, the latter with hoodmoulds terminating in plain block corbels. String course and clerestorey over, the glass throughout mottled with a blue border. Above the clerestory, a timber wagon roof with the principals carried down as plain wall shafts.  Lean to-timber roofs to the aisles. The division between nave and sanctuary is marked by triple colonettes carrying cusped principals. Three blind  arcades  to  the  apsidal  sanctuary,  with  carved  wooden  screens  (possibly original) separating this space from the flanking chapels. The original high altar is said to have been of Dutch design and was presented by the parish priest, Fr Hassing. It does not survive, but its statues of the Holy Family, St Francis and St Anthony survive mounted on the wall at the back of the church. The present sanctuary furnishings are of oak, including rails which have more the character of cancellae. The Sacred Heart altar was originally on the south side, in front of the organ, but was moved to the north side, and a marble altar installed, at the time of the consecration in 1923. At the same time the timber Gothic Lady Altar was installed in front of the organ in the south chapel.   There is now a projecting dais and timber forward altar in front of the original steps up to the sanctuary.  The nave seating consists of plain pine pews, There are some good original painted and framed Stations of the Cross, of Flemish character. 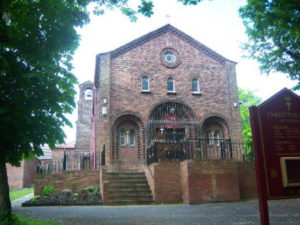 The church was built in 1928 on the initiative of Mgr William Hawkswell, secretary to Bishops Gordon and Cowgill, to serve the new housing estates at Sandford, Wyther, Westfield and Greenthorpe, to the west of the city centre. The church was built from designs by the Bradford architects Empsall, Clarkson and Clarke, with financial support from the New Mission Fund. It was the first of several post-First World War churches to be built in the suburbs of Leeds, and was opened by Bishop Cowgill. In 1931 a parish room was built, presumably also from designs by Empsall, Clarkson and Clarke. In 1936 a school was opened, served by Sisters from a convent newly- established in the parish, and the presbytery was also built about this time.

Small church in modern Romanesque style, purple-red brick with pantile roofs (plain tiles to presbytery and parish room). Gabled west front with three round arched openings  with  simple  neo-Romanesque  detail,  paired  hardwood  doors  to  larger central opening, paired window openings separated by short Romanesque columns within  smaller  side  openings.  The  west  front  is  framed  by  pilaster/piers  at  the corners. Three round arched openings over the entrance, and in the gable a circular window incorporating a Star of David. Dentilled eaves and a cross surmounting the gable. The flank elevations are more plainly treated, with pilasters marking the bays and two tiers of round arched openings (some paired, some single). Towards the east end,  projecting transept/sacristy on the south side, with a gabled bellcote at the junction with the nave, housing one bell, and a side entrance at the base. Corresponding transept/side chapel on the north side.  The east wall is plain, framed by pilasters with a small circular window in the gable.

The main entrance leads into a narthex area, divided from the church by three round brick arches, now with solid doors to the central opening and the side ones glazed in. The main space of the nave has exposed brick walls up to the height of the springing of  the arches of the lower  windows,  and  plastered  walls  above this  point.  Plain, opaque glass to the windows. A suspended ceiling has been introduced, though which the pendants of the original roof structure obtrude.   There is a large round-headed sanctuary  arch,  with  smaller  arches  to  left  and  right  to  the  side  chapels.  Short, square-ended sanctuary with good oak furnishings (panelling, reredos and altar). Complementing these, a fine wooden octagonal font with columnar supports in the south transept area. Modern bench seating.

Welcome to the parishes of Christ the King, Bramley and St Gianna Beretta Molla in Leeds​. We are part of the Diocese of Leeds.